How many of you remember when these were a common sight flitting around Nottingham from the two railway stations? 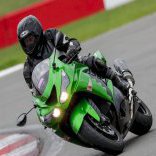 Don't worry folks, in a couple of years time there will be a revolutionary new transport system. You could call them, let's say, trolley buses, don't know why nobody thought of it before...

The tram driver didn’t have his hands on the steeering wheel.