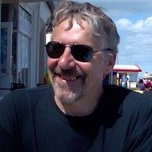 I remember Gaffa well, we used to go down to the Imperial quite a bit and Gaffa were one of the two bands we tried not to miss - the other was Slender Loris. As a band, I don't think you could get mo

Great gig last night. It's been 30 years but the years fell away pretty quickly. hope they do it again soon! Yes a ton of grey hair and sometimes no hair but everybody giving it large towards the end

Great to see you too Stu. I really hope there will be something soon in the pipeline. Just hope Rue is over for the next one otherwise he will be beside himself. I've been singing Attitude Dancing all